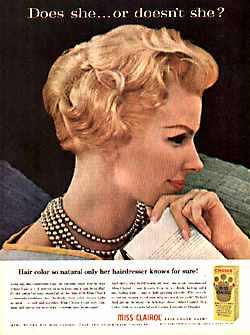 After seven years of research, Miss Clairol Hair Color Bath was introduced to the market in a primarily print-based ad campaign developed by Foote, Cone & Belding. Shirley Polykoff, the only female copywriter in the agency at the time, developed a tagline to convey just how natural the hair color looked: “Does she … or doesn’t she?”

Women immediately understood the meaning behind the tagline, but men often applied sexual connotations to the titillating phrase. So as not to alienate an important segment of their customer base — hair salons — the Miss Clairol ads began including the sub-head, “Hair color so natural only her hairdresser knows for sure!” Source 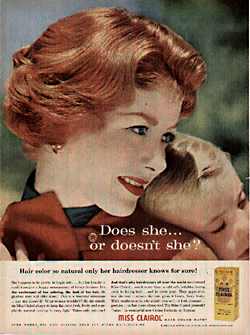 Pushing the envelope since 1957 To neutralize “Does she … or doesn’t she?” which men found provocative, the sub-head, “Hair color so natural only her hairdresser knows for sure!” was introduced And the original Miss Clairol concept was born Those blonde hair make us wonder if she dyes her hair or not. Does she or doesn’t she? Source: adage

More from the site

Clairol television commercials: From print to television, the magic continues.

Times of India wines Lion in Cannes: A great win at Cannes for the largest media brand of India.

Gillette print and television ads: A look at some of the ads from the iconic brand.