100+ The Most Memorable Advertising Taglines of All Time

The best advertising slogans are memorable and fit with the times. A good slogan is brief, yet memorable.

There are slogans, and then there are taglines. Slogans sum up what a company stands for, whereas a tagline concludes an ad, usually a commercial, with a quick sign off.

Think about the brands that you know well, and perhaps even love. Chances are, it’s not just a brand name you’re recalling, but a tagline, too. Almost all brands, products, and large corporations have some kind of tagline. Some are timeless, others get replaced every decade, or even sooner if it’s just not resonating with the public.

Some of the most memorable slogans of all time – “Where’s the beef?” or “Just do it” – not only sell the brand, but became synonymous with it

When you hear the phrase, “Just do it,” the first thing that comes mind is probably, Nike. What about “Open happiness,” “The pause that refreshes,” or “It’s the real thing”? Those phrases belong to Coca-Cola

That’s the power of a good slogan. They’re designed to stay with you seemingly endless repetition through commercials and billboards don’t hurt either).

There are slogans, and then there are taglines. According to brand consultant Laura Ries at Advertising Age, “Taglines are like the road sweepers at the end of a parade … they seldom position the brand.” A slogan, when done right, “sums up a company’s strategy,” she adds.

The TOP 100 Advertising Taglines Ever

Here are 100+ most memorable and recognizable slogans and taglines in advertising history. A Diamond is forever is an ultimate gem of an idea, an enduring emblem of love

Not many Americans proposed with the diamond engagement ring in the 1930s. For a long time diamond was viewed as symbols of wealth, power and decadent romantic dreams—a stone too precious and expensive to attain, writes AAAA. Then an ad campaign changed everything. Jewelry retailer De Beers hired N.W. Ayer & Son, an advertising agency based out of Philadelphia. Frances Gerety, the female copywriter who never married (pic above) came up with greatest professional achievement in the form of “A Diamond is Forever” which arguably has helped to create a sense of emotional attachment to the diamond engagement ring. And created a multibillion-dollar industry out of it. Since then, from 1947 through 1970, Ms. Gerety dedicated herself to De Beers. The tagline forever changed public attitudes, made diamond precious gemstone of choice for engagement virtually worldwide. The slogan became a symbol of enduring love weaving itself into popular culture and inspiring books, films, and songs. In 1999, Advertising Age proclaimed it the slogan of the century.

The surprising and morbid origin story of Nike’s slogan started with a murder. In 1976, Gary Gilmore murdered a gas-station employee. His lawyers tried to appeal the sentence, but something unusual happened: Gilmore insisted on execution. Before his execution, Gilmore reportedly was asked for any last words. His reply: “Let’s do it,” took much of media space and inspired advertising executive Dan Weiden who coined the term, Just Do It. Full story here.

Coca-cola has many slogans over the last century. Check it up here. This partcular marketing strapline is my favorite as it seems relevant even today. It talks about taking time to pause and refresh brains.

Subsidiary of cigarette maker Phillip Morris, Miller Brewing Company launched a new reduced-calorie beer product with the slogan “Tastes Great. Less Filling.” A new category was born. The product introduction later proved to be one of the most significant turning points for the beer industry. Full story here.

Undoubedtly, the most famous and talked about underdog advertising in the history of marketing. Timeless and resonates with people long after it’s been released into the world in 1962. More.

The story has it that Theodore “Teddy” Roosevelt has coined the term while having coffee at at the Hermitage, a famous Nashville resort.

The iconic orange box and the timeless slogan “Wheaties – The Breakfast of
Champions” has made Wheaties a genuine American icon and a metaphor for greatness and success. Know more

Dyeing and coloring hair was mired withs social stigma back in 1956. Mostly women from stage or sidewalk colored their locks. To eliminiate the social stigma through communication, Clairol hired FCB. Shirley Polykoff, FCB’s sole female copywriter then realized that the proposition to sell Miss Clairol would revolve around reassuring its buyers that the color they’d get from that little box would be so natural, nobody would ever guess. The tagline, “Does she…or doesn’t she?” reaffirmed that belief and the rest was history.

The premise was to show Morton Salt was so free flowing that it pours even during rainy weather. The message and the campaign, originated around 1900s, is  still considered to be one of the most successful and lasting ideas to originate.

“Where’s the beef?” instantly captured audience’s attention after the actress named Clara Peller demanded to know this in the commercial.

With a punch of patriotism this classic beer campaign has tapped into powerful emotions of Canadians and consistently won brand love for over decades. The assertion of the premise, “The Champagne of Bottled Beer,” relied on its dare, bold argument. Luxury in mind, the company designed beer bottled with sloping slides resembling conteporary champagne bottle. Though, a great success of its time Miller later changed strategy and celebrated the working man instead of branding its beer a luxurious item.

To offer its new calling plan of unlimited calling to select five members, T-Mobile unveiled Stick Together tagline. The campaign was preceded by Get More in 2005 and followed by Uncarrier in 2013.

Co-founder Roger Ailes conceptualized the iconic catchphrase during the formation of the network. After his demise at the age of 77, Fox News has dropped it for a new slogan, Most Watched. Most Trusted.

WINS, 1010 on the AM dial initiated this easily identifiable and distinctive slogan to promote its twenty four hours programming. The tagline is a reference to WINS’s format clock, which returns to the top stories every twenty minutes. WINS also has used other memorable slogans such as All news, all the time, The newswatch never stops, Listen two, three, four times a day.

An iconic slogan,  an assertion that has endured long after the slogan was retired. The slogan ‘It’s Not TV. It’s HBO’ was introduced in 1996 as a smart way of differentiating a HBO series from its competition by distinguishing its original series as something unique and of value – something audiences cannot get elsewhere. The spots, conceived by ad agency BBDO New York, sought to reflect the spirit and the programming of HBO. Instead of previewing upcoming events or providing a traditional ‘‘tune-in’’ message, the ‘‘It’s Not T.V. It’s HBO’’ campaign attempted to present the viewer with a sample of HBO’s programming. Link

19. Best Buy “Thousands of possibilities. Get yours” – Year unknown

That was Microsoft’s first worldwide advertising campaign. It involves print, television, outdoor (billboard) medium. Launched in 1994, the campaign costs Microsoft $100 million till the end of 1995, out of which $25 million was spent during the holiday shopping season ending in December 1994.

Not a favorable review of the campaign. Consider this (Source: faculty.msb.edu)

Want to download music? Another $3.95 to $17.95, please. Voice messaging, $5.95. Oh, please. Unlike cable, there are no discounts for buying multiple services. The strategy is ruled by spreadsheet and the stock price, not the marketing sense that made AOL’s mark.

26. SBC-Yahoo “It’s the Internet that logs onto you”

The GNU Manifesto begins by outlining the goal of the project GNU, which stands for GNU’s Not Unix. The current contents of GNU at the time of writing are then described and detailed. Richard Stallman then goes into an explanation of why it is important that they complete this project. The reason he explains is based on Unix becoming a proprietary software…A large part of the GNU Manifesto is also focused on rebutting possible objections to GNU‘s goals. Objections described here include the programmer’s need to make a living, the issue of advertising/distributing free software, and the perceived need for monetary incentive. Source: Wikipedia

There are various forms of free or very cheap publicity that can be used to inform numbers of computer users about something like GNU. But it may be true that one can reach more microcomputer users with advertising. If this is really so, a business which advertises the service of copying and mailing GNU for a fee ought to be successful enough to pay for its advertising and more. This way, only the users who benefit from the advertising pay for it. Source: The GNU Manifesto

28. Edison Records “Echo Around the World” 30. Mercury Records “First with the Hits”

Sounding little bit creepy? Well, back in 1950s we probably were not as complicated as we are today. The new Timex tagline is “Timex. Life is ticking”

THE venerable theme for Timex, ”It takes a licking and keeps on ticking,” looks to be taking a final licking.

The Timex Corporation, in a campaign from its new agency, Kirshenbaum Bond & Partners in New York, is dropping the ”licking/ticking” slogan — introduced in the 1950’s and brought back in the 1990’s — for a theme intended to help update its image. The goal is to freshen the Timex appeal with consumers ages 18 to 34, whose wrists are increasingly sporting other watch brands like Kenneth Cole, ESQ, Marc Ecko, Fossil, Guess, Swatch and Swiss Army that they deem more hip.

The theme change, to ”Timex. Life is ticking,” is part of an advertising makeover after Timex left its agency of 16 years, Fallon Worldwide in Minneapolis, part of the Publicis Groupe. Source: The New York Times

“Maybe she’s born with it. Maybe it’s Maybelline” advertising tagline is created. Still a great success for the brand today, this tagline continues to be recognised around the world.

90s supermodel Christy Turlington helped make the tagline “Maybe she’s born with it” famous in 1991, and returned to represent the brand in 2006. Victoria’s Secret Angel Adriana Lima has been Maybelline spokesperson from 2003 to 2009. 37. Mastercard “There are some things money can’t buy. For everything else, there’s MasterCard” 1997 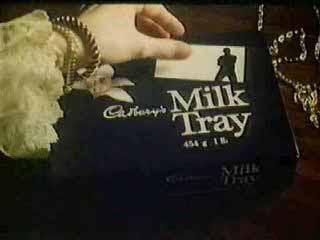 McDonald’s “We do it all for you” 56. Fairy Liquid “For hands that do dishes…”

60. Remington Shavers “I liked it so much I bought the company” 63. Adidas – Impossible is nothing.