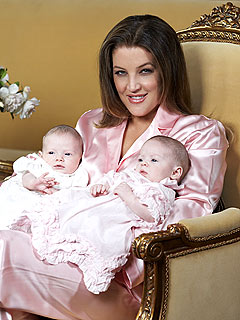 Elvis Presley’s only daughter Lisa Marie Presley and her hubby Michael Lockwood are welcoming twin babies, Finley and Harper, has been photographed by People magazine.

To become a pregnant was not an easy task for her, reveled Lisa Marie Presley, “”We tried to get pregnant for two years. My blood was too thick and would clot, which caused several miscarriages. The moment I took blood thinners, I got pregnant.”

The baby twin girls are the 40-year-old’s third and fourth children and her first two with Lockwood. Presley is also mom to Danielle Riley (19) and Benjamin Storm (15) from her first marriage to Danny Keough.
While speaking with the magazine, Lisa also tells her plans of getting back into shape after giving birth to Harper and Finley in October 2008. She said, “I was unable to see my toes by the fourth month. But I only gained 30 lbs. total. I worked out up until the seventh month.”