Chrome: Google wants to be a big brother on web? 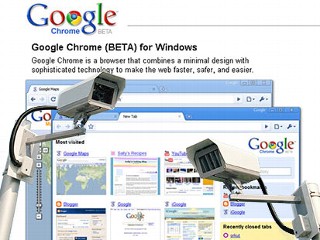 While we’re transfixed by the presidential election, in the world of high tech another duel between two well-funded, take-no-quarter candidates has just emerged … and in the long run the impact on our daily lives may be nearly as great — and perhaps even sinister.

As you probably heard, on Monday — that is, on a national holiday, when business announcements are almost never made — Google rolled out Chrome, its new Web browser.

Why the odd timing? Hard to say. Google surely knows that just about anything it does these days is going to cause a news frenzy — and especially when it’s announcing its first thrust into a huge new market.

So, perhaps it hoped to temper this coverage to a degree, and drag it out for several days. Or perhaps Google was unsure about the product itself, and didn’t want to overhype it — and then face a potential backlash. Or, maybe Google just didn’t think Chrome was that important, saw a window between the two political conventions and rushed it out.

Google’s official explanation is that the Labor Day release of Chrome was an accident, and the Terms of Use attached to that product were simply a cut-and-paste from other Google products. We will leave it to the reader to decide if these are viable explanations from a multi-billion company regarding one of its biggest new products in years — and, if true, what it says about Google’s competence in handling some of your most sensitive information.